Built at Portsmouth, the Mary Rose was in naval service for more than 30 years. On 19 July 1545, during Henry VIII’s third war with France, the Mary Rose was engaging a French fleet off Portsmouth. One of the earliest English vessels to have lidded gun ports, the Mary Rose sank while turning due to water coming through open ports on the lowest gun deck. Almost all of the crew was lost. Following the rediscovery of the wreck in 1971, thousands of artefacts were recovered. The remains of the ship were painstakingly raised in 1982. The Mary Rose Museum in Portsmouth now enables an extraordinary understanding of the complexities of a warship from the middle of the 16th century and the lives of those on board. From clothing and personal items to guns and cannonballs, the Mary Rose allows us a unique and unrivalled glimpse into Tudor England.


Aircraft carriers and the deployment of air power have become essential in modern naval operations, extending the range and capabilities of any fleet. Carriers have replaced battleships as the most important ships in a navy’s fleet. At 280 metres long and displacing 65,000 tonnes, the aircraft carrier HMS QUEEN ELIZABETH is the Royal Navy’s largest-ever ship. With a beam (width) of 70 metres at the flight-deck level, and a height from keel to masthead of 56 metres, the carrier dwarfs most warships currently on the high seas. Designed to meet modern-day challenges, the ship will carry the next generation of naval warplanes. Along with the second aircraft carrier in this class, HMS PRINCE OF WALES, the Queen Elizabeth will play a central role in the Royal Navy’s future. The ship can carry up to 40 aircraft and the flight deck occupies 1.6 hectares. Already in full naval service, she will conduct her first operational deployment in 2021. The ship has been painted by renowned marine artist Robert G Lloyd especially for the stamp issue.


Best remembered as Admiral Lord Nelson’s flagship at the Battle of Trafalgar on 21 October 1805, the Victory had seen nearly 40 years of active service before then. At Trafalgar, the ship was involved in heavy fighting against the combined French and Spanish fleet, during which Nelson was mortally wounded. Between 1808 and 1812, HMS VICTORY was Admiral James Saumarez’s flagship in the Baltic, within what was then the senior red squadron of the Navy. At this time, the ship flew the red ensign. Until 1864, the Navy operated a squadron system of blue, white and red. Later, the white ensign was adopted for Royal Navy warships, red for the merchant service and blue for auxiliary vessels. In dry dock at Portsmouth since 1922, HMS VICTORY is the oldest commissioned warship in the world. The flagship of the First Sea Lord, head of the Royal Navy, Victory is now at the National Museum of the Royal Navy.


HMS DREADNOUGHT was a revolutionary warship: the first of a new class of heavily armed and armoured battleships known as dreadnoughts. At a stroke, all existing battleships were obsolete, giving the Royal Navy an immediate, if short-lived, advantage over its rivals. The major naval powers had to decide whether to adopt this expensive new technology and challenge Britain or accept second-class status. Only a handful of countries chose the former. By 1910, the scale of British battleships increased yet again with the development of the Orion class of ‘super-dreadnoughts’. Despite formidable firepower, HMS DREADNOUGHT never engaged an enemy fleet. The ship’s only significant wartime action was the ramming and sinking of the German submarine U-29 on 18 March 1915. In 1921, then outdated and surplus to requirements, the once-mighty ship was sold for scrap.


When launched, HMS WARRIOR was the world’s largest warship. It was also Britain’s first ironclad ship, built to counter the armoured French ship La Gloire (1859). Ironclad ships replaced traditional ‘wooden walls’, which were vulnerable to explosive shells. The Victorian period saw several revolutions in warship design. HMS WARRIOR used a combination of sail and steam but later ships were solely steam powered. The Warrior’s armament followed the old pattern of gun decks but more manoeuvrable turrets accommodated the next generation of weaponry. While the Warrior’s armour was mounted on wood, warships were soon constructed entirely of metal. The age of the ironclad ship quickly became that of the battleship. HMS WARRIOR never used her guns in anger. The ship ended a very long naval career in 1978, after 50 ignominious years as a floating oil jetty. Fully restored, the Warrior is now preserved at Portsmouth as part of the National Museum of the Royal Navy.

Sovereign of the Seas


The Sovereign of the Seas was built at Woolwich Dockyard as a personal project of Charles I. At this time, fighting ships were also statements of royal and national power, designed to boost the monarch’s prestige. They were richly decorated, carrying royal symbols, such as coats of arms and ciphers, and allegorical motifs. The Sovereign of the Seas marked the height of this trend with her extraordinary decoration, designed by the dramatist Thomas Heywood. The prohibitive cost of such ornamentation led to its reduction and eventual constraint to the ship’s figurehead. In common with other great wooden warships, the Sovereign of the Seas had a long career, being rebuilt twice to ensure her seaworthiness. Variously renamed Sovereign and Royal Sovereign, the ship saw action during the Anglo-Dutch Wars. However, increasingly leaky, the old ship was laid up at Chatham, where she was destroyed by fire in 1697.


In May 1941, the German battleship Bismarck destroyed the British battle-cruiser HMS HOOD with the loss of more than 1,400 men. As the flagship of Admiral Sir John Tovey, HMS KING GEORGE V played a key role in the Royal Navy’s subsequent hunt for Bismarck, involving dozens of British warships and aircraft. The Bismarck was eventually sunk by Tovey’s fleet. The KING GEORGE V was then deployed on Arctic convoy duty before joining the British Pacific Fleet, being present at the Japanese surrender in Tokyo Bay. After the war, a brief spell as flagship of the Home Fleet was followed by service as a training vessel. The battleship was mothballed in 1950 and scrapped in 1958. Royal Mail commissioned artist, Robert G Lloyd, to create an original piece of artwork of the HMS KING GEORGE V for the stamp issue.


As a ten-gun brig-sloop, HMS BEAGLE was an ordinary Navy warship. In 1825, the ship was adapted for surveying work and allocated to the Hydrographic Office, working on the Royal Navy’s sea charts. The Beagle’s first voyage (1826–30) was to South America, surveying the coasts of Patagonia and Tierra del Fuego. The second voyage (1831–36) secured the ship a place in world history because Captain Robert FitzRoy chose as scientist and companion the young Charles Darwin. The expedition revisited South America then circumnavigated the globe. Darwin’s time on the Beagle was transformative, culminating in On the Origin of Species by Natural Selection (1859), which set out the theory of evolution. HMS BEAGLE undertook a final voyage to chart the coasts of Australia (1837–43). The ship was then used as a static coastguard vessel and by Customs and Excise to counter smuggling on the River Thames. It was sold off in 1870 and broken up. 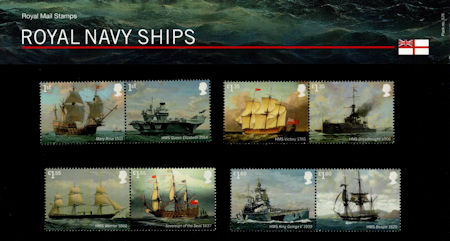 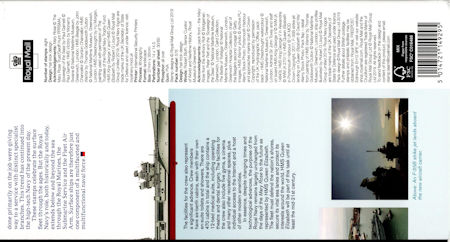 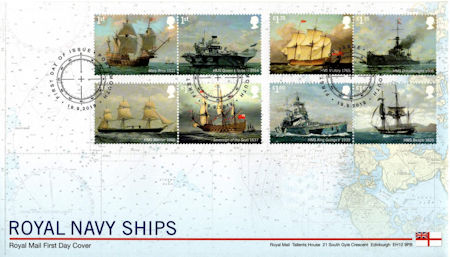 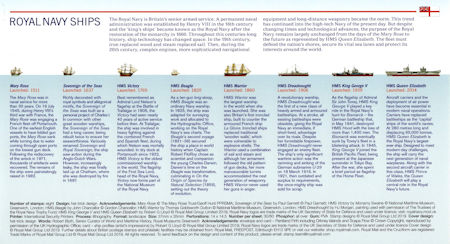 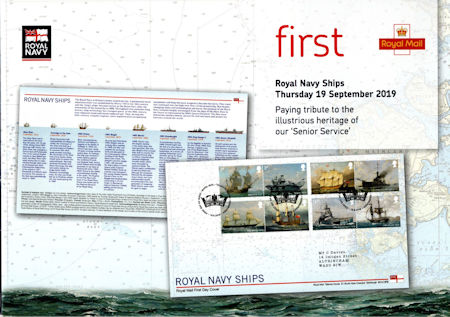 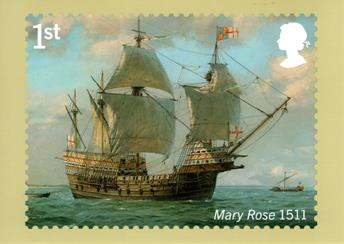 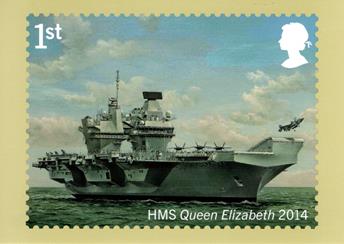 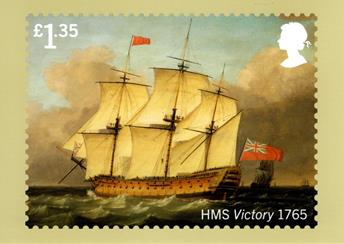 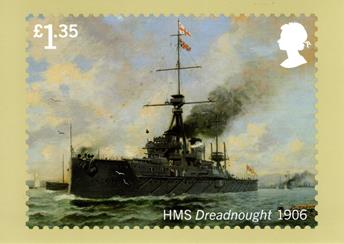 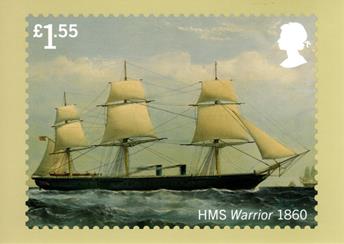 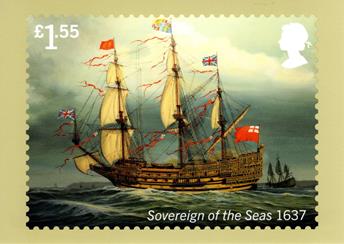 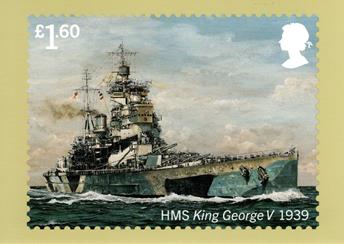 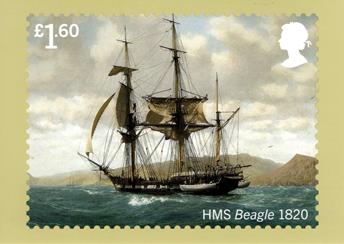