90th Birthday of HRH The Prince Phillip, Duke of Edinburgh

The sheet comprises of ten 1st Class Union Flag stamps alongside photographs taken throughout HRH Prince Phillip’s distinguished life. These include photographs from The Prince’s career in the Royal Navy to the present day in his role as Britain’s longest serving Royal consort.

Throughout his life The Prince has worked tirelessly, not only for the monarchy but also for charities, universities, the armed forces, sporting and young people’s organisations, the fields of science and technology, and for British and Commonwealth interests.

The Prince is the founder of the Duke of Edinburgh’s award scheme, which more than four million people in over 60 countries have taken part in since its inception in 1956. HRH Prince Philip is also patron of more than 800 British and Commonwealth organisations ranging from the Association for Science Education to the International Sacred Literature Trust. 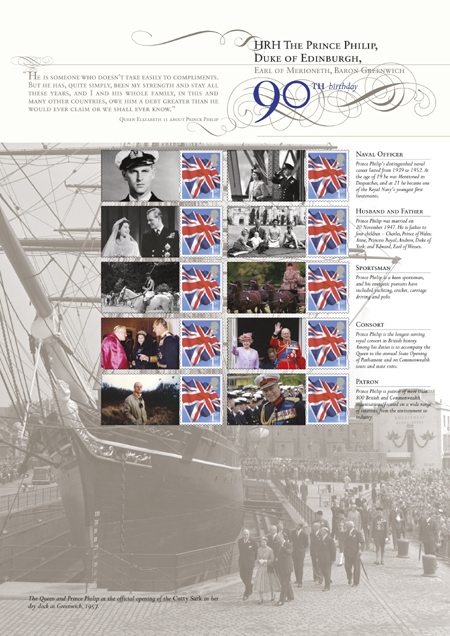